New wetlands store over 50 tonnes of carbon per year

More than 40 new wetlands and ponds that we’ve created by working with local farmers and landowners will help combat climate change by storing over 50 tonnes of carbon per year.

We’re undertaking major catchment restoration and natural flood management projects in the Rivers Cocker and Glenderamackin catchments, from Crummock Water to Cockermouth and Mungrisdale to Keswick, and has also added wetlands at the Rivers Keekle and Annas.

Wetlands are one of many types of feature being added to the Lake District landscape as part of these projects. Since January 2020, 43 new wetlands and ponds have been constructed covering a total area of 19 hectares. Freshwater wetlands cover 6% of the Earth’s surface but hold up to 30% of all carbon contained in soil. It is estimated that West Cumbria’s new wetlands will store around 52 tonnes of carbon per year.

A new wetland in the Naddle, near Keswick

Carbon storage is just one of many benefits wetlands offer. They also increase biodiversity by providing vital habitat for wildlife, including birds, otters, amphibians, and a wide range of specially adapted aquatic plants. Water quality is improved as wetlands trap fine sediments.

A further benefit is that water is held in the landscape for longer, helping to improve both drought and flood resilience. The new wetlands store 37,000 cubic metres of water permanently, and those above communities at risk of flooding are carefully designed to provide space for a further 40,000 cubic metres of temporary storage during storms. Conversely, in drought, they help keep water in the landscape longer, releasing it slowly to keep streams flowing for longer and providing a refuge for wildlife. 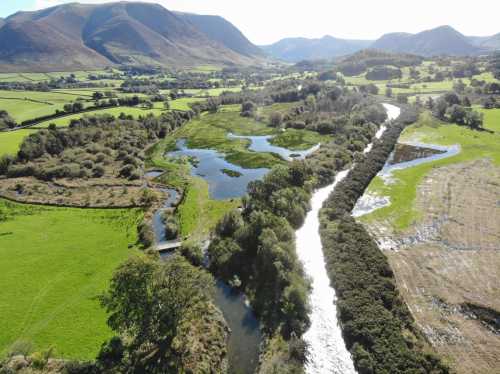 A new wetland at Whitbeck, near Lorton

Vikki Salas, Assistant Director, said: “Wetlands have a huge range of environmental benefits and it’s really exciting to be working closely with multiple farmers and landowners on major catchment restoration projects such as these, helping to address the climate and biodiversity crisis.

“Going forward we want to see the right funding, incentives for farmers, and advice in place to ensure these sort of features are scaled up across the landscape and are part of formal flood risk solutions.

“We’d like to thank our partners, funders and the fantastic local farming community who have really got behind these projects and worked closely with us to make them so successful.”